This area was originally called White’s Prairie for Captain James White of Ohio who was the first permanent settler upon it.  A large portion of the area now called St. Paul was owned by a prominent gentleman, Wm. C. Lindsay, settled here from Kentucky in 1829.

At this time in history, the St Paul area was called Comegis Prairie for Mr. Comegis who owned a mill within the present site of town.  When a dog fight went awry and a general fight ensued with so many engaged in this fight, it became widely known as “Dog Prairie”

By 1840, the steam flour and gristmills in this area were producing 50,000 barrels of flour annually.  A number of families immigrating from Germany and Prussia, built a small log cabin to serve as a church.  A visiting Jesuit missionary would say Mass there.

Fr. Conrad Tintrup, a German priest, was sent to handle the churches at Dog Praire, now named St. Paul and Allen Praire, now named St. Joseph, which were founded in 1849 and the parish school was opened and staffed by laymen, then later by Ursuline Sisters in 1872.  In 1935 the Precious Blood Sisters of O’Fallon came to staff the school.

The Village of St. Paul was incorporated on July 2, 1976 by the St. Charles County Court with C. Nick Vomund as first Chairman of the Board of Trustees.  The City of St. Paul was established as a Fourth Class City by election of voters in April, 1992. 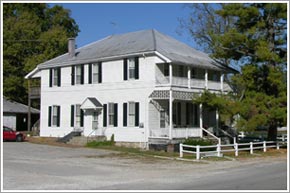 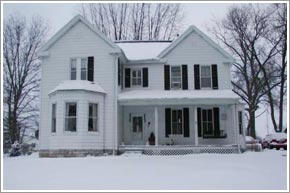 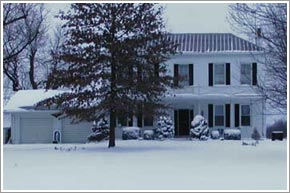 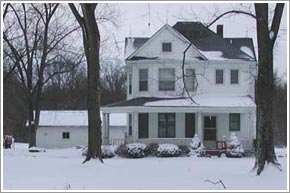 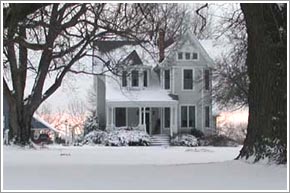 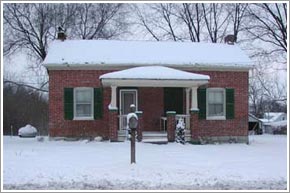 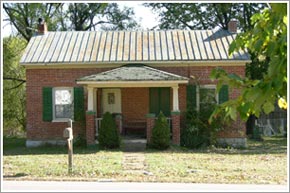 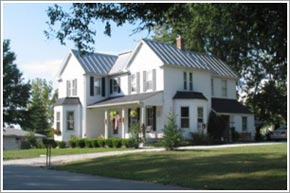 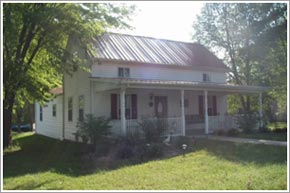 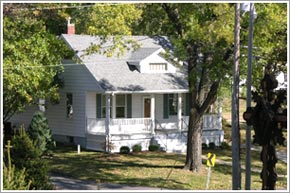 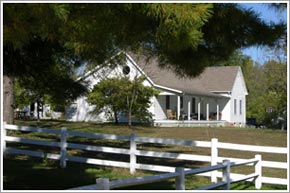 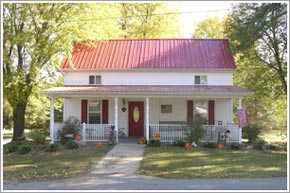 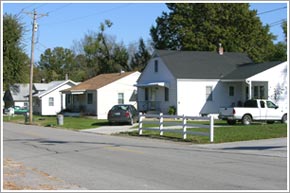 A number of German farmers banded together in 1836 and erected a small wooden building near the site of the present St. Paul Church. The little church was the site of occasional Sunday Masses celebrated by Father Lyons of Millwood. This wooden building was later used as a home for the tenant of the church farm and later as a school.

The land transaction from Mr. Haas to the Jesuits of St. Louis for the purpose of constructing a Catholic church in the farming region of Dog Prairie, more formally referred to as Wellsburgh, Upper Dardenne, was completed in 1848.

As the little group of worshipers increased in number, they outgrew the wooden building and in 1849 the cornerstone of a new church was laid. A Jesuit from St. Charles officiated at the ceremony. It was decided by the group to build the church of rough limestone blocks. The structure was 40’x80’ with a wooden spire and was completed in 1854.

Reverend Edward Hamill was appointed the first pastor in 1852. Father Conrad Tintrup was appointed pastor of St. Joseph at Allen Prairie and the second Catholic Church at Wellsburgh in 1859. He named the second church, St. Paul.

In 1895 preparation was begun to build a new and larger church. The parishioners donated their time and money and hauled 500 wagon loads of sand, rock, 37,000 bricks, lumber, and slate to the site. Most of the materials were shipped by railroad to Richfield station, north of Highway 79, and the village by wagon. Acquiring the building materials took nearly two years. On July 13, 1896, Holy Mass was celebrated for the last time in the limestone church. During this month of July, the building was pulled down and much of the stone was used in the concrete foundation of the new church. For a year, Mass was held in the school building which had been built in 1867. The architectural style of the church was known as American Gothic Revival and the exterior was of buff colored brick with a slate roof. The dimensions were 47’x118’ with a spire reaching 125’. Notes kept by Father Tintrup dated March 1, 1898, revealed the following: “Upon completion of the building, the high altar, side altars, confessional, organ bells, and other utensils used in the old church were moved to the new one.” It is agreed among senior members of today’s parish that these are the same altars, with some remodeling, present in our church today. Father Tintrup listed the total cost of the building $20,000.

Reverend Gerard Fick was named assistant pastor of St. Paul in 1900 after Father Tintrup contracted a serious eye affliction. Father was forced to retire because of blindness in 1903 and was followed by Reverend Bernard Benton who remained at St. Paul until 1906. Reverend Peter Byrne was pastor from 1908 to 1909. Reverend Edward Kern was named pastor in 1909. Some of our senior parishioners remember that the altars were originally much taller, crowned with a statue of the Sacred Heart and saintly statures in the niches at each side. It is believed to have been during Father Kern’s pastorship that a section was removed from the altar to make it shorter. The Sacred Heart statue was then placed on a pedestal near the side altar and a large crucifix was mounted above the tabernacle. In 1937 Father Kern died of heart failure in the rectory.

Monsignor John Fischer was appointed pastor in church 1937. He saw a need for repainting of the church interior. He requested that each family give one dime each Sunday and the church could be redecorated. He initiated the weekly contribution envelope and his campaign was successful. The Monsignor remained in St. Paul for six years until Reverend James Beggan was assigned to the post on March 8, 1943, and died suddenly on August 14, 1943. Reverend Charles Schmidt assisted at the parish for several months until Reverend Michael Bresnahan was appointed to St. Paul late in 1943. Father purchased a bronze tabernacle door, present today, to replace the wooden one. He added spotlights in the sanctuary to highlight the tabernacle. Reverend Leo Sullivan served as pastor from 1957 until 1960. Reverend Henry Kohnen became pastor in 1960. His first undertaking was the remodeling of the church in 1961. This was in response to the bishop’s plan to build a new church. Father Kohnen’s plan was to make the church as good as new for much less money than the proposed amount needed for a new building. A new roof was placed and slate was applied to the bell tower. The buff brick walls were tuckpointed and new sidewalk laid. The interior was painted in shades of gold and beige. The original multicolored stained glass windows, donated by parish families, were replaced with amber glass and exterior storm windows. The tall windows in the sanctuary were closed. Much ornamentation was removed from the altars and the brightly colored statues were repainted in somber hues. The Sacred Heart and St. Elizabeth statues were put in storage. The Sorrowful Mother was placed in the baptistry. The crucifix above the main altar was replaced with one of linden wood imported from Italy. The dark wooden communion railing was removed and replaced by one of wrought iron and a matching iron lectern was added. The highly ornamented pulpit, surrounded by statues of the evangelists, was also removed. The dark wood canopy of the pulpit was painted white and placed above the tabernacle on the main altar. Red carpet was laid in the aisles. White linoleum was placed in the sanctuary. The benches and light fixtures were also replaced. There were changes from top to bottom, inside and outside.

During Father Kohnen’s pastorship, Vatican Council II was held and the decree was issued that Mass could be said in the language of the people and the priest was to face the congregation. A simple white wooden altar was placed in the sanctuary to accommodate. This “table” became the main altar. Mrs. Elizabeth Johannesmann Vomund donated an altar made of wood and formica a few years later.

Reverend Francis Muellner was pastor at St. Paul from 1969 to 1972. Reverend Joseph Meissner served from 1972 to 1976. and made some changes in the church building. He altered the confessional to accommodate face-to-face penitents and he removed the gates from the communion railing to open the sanctuary to the congregation. He also added air conditioning to the church.

Reverend Raymond Liermann was appointed pastor in 1976 and served until 1987. During his pastorship a restroom was constructed behind the baptismal area in the back of church. Reverend Joseph Wolf was appointed pastor in 1987 and served only a few months followed by Reverend Monsignor Bernard Boessen. The Monsignor initiated a redecoration program in 1990. Since Vatican Council II, a distinct emphasis has been given to the sacrament of Baptism and it seemed appropriate to move the baptismal font to the sanctuary. The confessional was moved from the original position on the south side of the church to the back of the church. The Last Supper in bas relief was moved from the high altar to the main altar where it was more visible to the congregation. A white wooden lectern in the style of the altars was added. Parishioners were nostalgic for the old statues, and the Sorrowful Mother, Sacred Heart, and St. Elizabeth were returned to the church from storage. The church was repainted and mauve carpet was laid throughout the building. Monsignor Boessen oversaw the redecoration and reopening of the side chapel for perpetual adoration in 1991. Due to unforseen circumstances, the City Offices will be open by appointment only. Please call  to schedule an appointment or for any general questions you may have.

We apologize for this temporary inconvenience.